Nice to Meet You 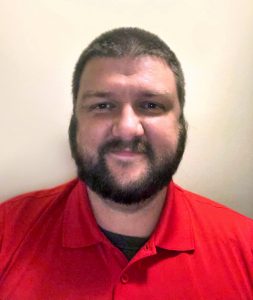 Brandon Rummage is the Power Delivery Engineer for North Carolina Eastern Power Agency (NCEMPA) and a part of the ElectriCities’ 24/7 on-call team.  He has an Electrical Engineering Degree from UNC-Charlotte and started his career at the Electric Power Research Institute (EPRI) as a Project Engineer.  As the Power Delivery Engineer, Brandon is responsible for NCEMPA’s Load-Side Generation policy & database, NCEMPA’s Point of Deliveries from Duke Energy Progress, the retail billing and solar meters that ElectriCities reads for our NCEMPA members, and assisting with the installation/maintenance of our hosted AMI deployments, as well as load management field equipment.

Dogs and Deer to Decompress

No day is the same for Brandon Rummage, ElectriCities Power Delivery Engineer for NCEMPA. He handles delivery point issues between Duke Energy Progress and our members in Eastern North Carolina; he manages ElectriCities’ policies and database for load-side generation; he produces the monthly Power Agency Generator Report; he manages 300 retail billing meters and 25 solar meters. He’s also a member of our 24/7 team, a 5-person group that monitors telemetry across the state and dispatches load management strategies, generators, and voltage reduction to catch and reduce the peak load and save our members money.

On the 24/7 team, members will be on call for weeks — you’re all-in. But there are just a few days a year when Brandon might be unavailable: during deer hunting season. “In the summer, I’m totally committed. But sometimes in the cooler months, I let everyone know I’m going to go out hunting for a few hours in the morning. We’re a real team, so they understand.”

Brandon has always enjoyed the outdoors. Growing up, he was a Boy Scout and earned his Eagle Scout, and in college he “went hiking and camping all the time.” As an adult, he’s settled into a career that hinges on the weather — “When we’re on-call, in the summer we run for hot days and in the winter we run for cold days” — as well as hobbies that do the same. “Deer tend to move more when it’s cooler, which is during the rut, their mating season,” Brandon explains.

While deer hunting is his current favorite, Brandon is also interested in turkey hunting, and he fishes when he can during the warmer months. You might also find him on his rock crawler; he used to travel with a club, but that’s taken a back seat for now. No matter what, he’ll be in the great outdoors.

“Hunting, for me, is not about putting deer heads or turkey fans on the wall,” Brandon says. “It’s about putting organic meat into the freezer.” It’s also about learning the land, and Brandon plants several acres of food plots twice a year to both attract deer and maintain a better local ecosystem. “I’m learning how to be a better wildlife manager.”

And then there are the cherished memories made. Brandon’s uncle is an avid deer hunter and he has a good friend who’s a devoted fisherman, so time with them is just as fun as the activity. “It’s good to spend time in the woods and lake together,” Brandon says.

Of course, memories don’t have to be with people. Brandon is also passionate about dogs, especially Labrador retrievers. He’s had two yellow labs in the past, and while he doesn’t have any currently, his family has plenty. “I love playing with the family dogs.” Between his brother and his parents, there are 4 chocolate, black, and yellow labs, as well as a feisty Pomeranian who’s learned how to hold her own. A few years ago, his brother’s lab had a litter of puppies, and one went to a fellow ElectriCities colleague! “Life is more fun with dogs,” he says with a smile.

We Want to Hear from You!

We want to shine a light on the folks who keep the lights on, the faces behind the public power that drives our communities. We’ll be sharing a few stories about our team here at ElectriCities, from what inspires us to some of our favorite hobbies.

But this isn’t just about us. We want to hear from you! Do you have an employee who goes above and beyond? What about a team member or leader with an impressive extracurricular accomplishment? Let us know by sending your stories and ideas here.