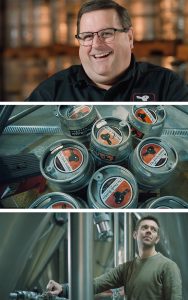 It’s not surprising that the small public power town of Farmville, North Carolina got its name as a proud nod to its deep agricultural roots. After all, it was a major tobacco grower from the late 1800s to the 1970s. What may come as a surprise is that today, Farmville is home to one of the most popular small craft brewery brands in the country –The Duck-Rabbit Craft Brewery.

It too, has a colorful explanation for the inspiration behind its whimsical moniker. The brewery’s founder, Paul Philippon, a former college philosophy professor, wanted the name of his company to symbolize ties to his former life in academia. Which explains why the company’s logo is based on an illustration from “Philosophical Investigations by Ludwig Wittgenstein” — a philosophy book Paul admires — which resembles a duck or a rabbit, depending on the viewer’s perspective.

Founded in 2004, the company specializes in dark beers — a section of the market Philippon believed was being underserved. It currently produces 12 different brews, four of which are available year ‘round. And with a full flight of ales, porters, and stouts available, there’s something to strike the fancy of any dark beer aficionado. Visit www.duckrabbitbrewery.com to learn more.